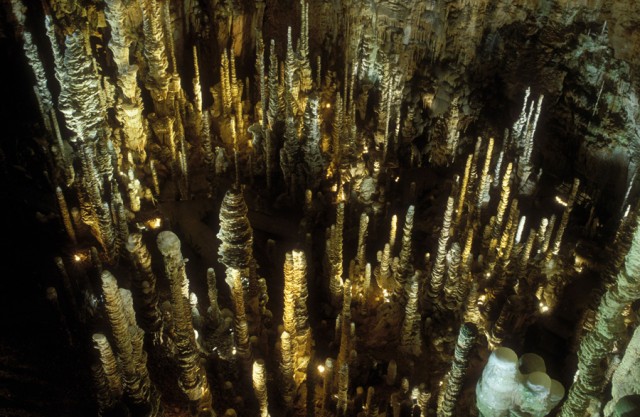 Discovered in September 1897 by the blacksmith Louis Armand, and made famous for Edouard-Alfred Martel, the Swallow-hole Armand, located in Lozere on the Méjean Causse, is an exceptional underground site which was described “as Apotheosis of the Caves” by the creator of speleology!

After a transport out of funicular which makes it possible to go down about fifty meters, one arrives on a superb panoramic balcony, one embraces of only one glance a palate of dream emphasized by a bath of light learnedly orchestrated.

The spirit is immediately struck by the unreal vision of a virgin forest petrified since the night of times!

The descent by a comfortable staircase makes it possible to appreciate the harmony of this vacuum sparkling of splendours;

one can see an end of diffuse sky which is the well of original access, and to question itself plumb with a second chimney, blind man that one and which emerges with the vault of the vast room. 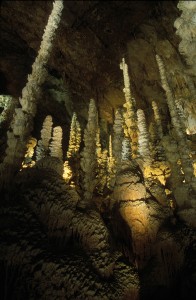 Coiled between splendid calcite barrels, similar to trunks of palm tree, the advance continues gradually to the bottom, to a large vertical well which carries out to – 197 m under surface.

This site presents more than 400 stalagmites “out of piles of plates” or “pine cones” exceeding at least 1 m in height.

The largest stalagmite of this prestigious unit (classified among the sites of Lozere on August 20th, 1941) is highest known of this type. 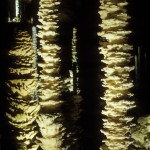