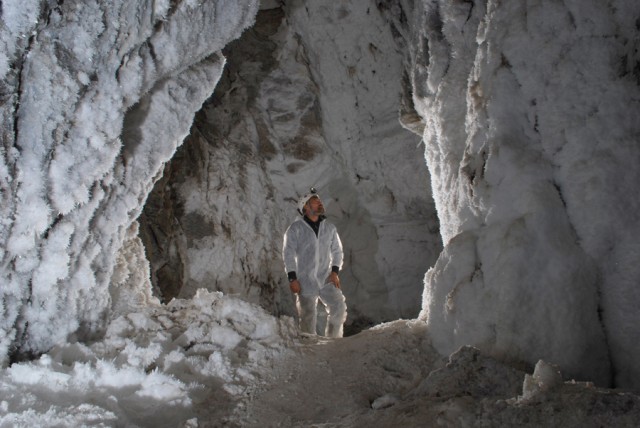 Within the ariége part of Pyrenees, in the village of Sentein , the complex Chasm Martel / Cigalère , emblematic of Norbert Casteret , from 1932 till 1938,who discovered and explored alone or with his wife Elizabeth these two cavities, which form a group developing from 1700 till 2100 m from altitude.

The large triangular entrance of Cigalère , opens at the foot of the massif of Bentaillou , at the root of the limestone of the same name.

It gives access to an underground torrent interspersed with waterfalls with affluents in contact with losses in high mountain, of which the chasm Martel.

Wonders in aragonite and gypsum were discovered there, by N. Casteret, then, in the Fifties, by speleologists of Provence and Belgium.

Since 1970 the Association of Underground Research of Haut-Lez, discovered many prolongations of which some very sintered, and ensured the management of the whole.

Cave classified under the sites (April 24th, 1981), Cigalère is especially famous for its famous “Seventh heaven”, the richest ECRIN avoided of gypsum concretions of all France.

The gypsum needles, the “spearheads”, the “furs of stoat”, the “hair of angel”, the “flowers and sticks of gypsum”, etc, took in this cave of legend, exceptional dimensions. It also conceals, with profusion, of the great quality buildings aragonitic.