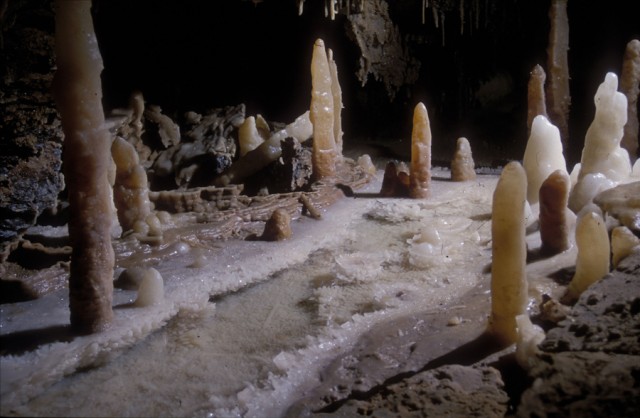 Located in the Pyrenees Audoises on the commune of Escouloubres, she known since prehistoric times and is visited as of the end of the 19th century by curists of Axat.Sommairement arranged and electrified by 1934 to a calcite stopper, the cave really became important only after the release of this last by Jean Bataillou and her son Michel, in July 1965: the length of the cavity was increased to 6 km. The cave of Aguzou, which is classified among the sites (August 1st, 1990), is a remarkable cavity by its beauty and its mineral profusion.

Since 1967, original visits are proposed in the form of underground excursions, and this on a distance from 1600 Mr. the cave is not arranged for tourism and one visits it in behaviour of speleologist under the control of a guide. These original visits (“safaris”) allow a year a thousand of people of extasier in really exceptional spaces and which have as names: the Bath-tub of the Stars, the room of the Minaret, the gallery of the Flowers, the room of the Crown of the Queen and the fantastic room of the Thousand and one immense Nuits.Une long room of almost 300 m can be seen since a view-point with the terminus of the tourist visit.