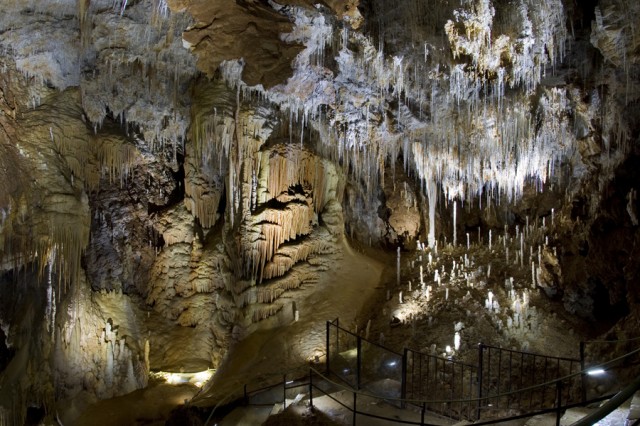 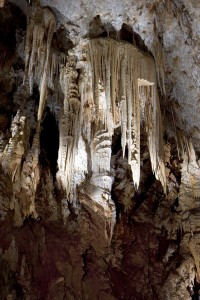 The Clamouse Cave is located in the Gorges de l’Herault and its name comes from the “clamour” legend ( a  crying mother saw her son brought  back to life after falling in the Aven of the Larzac).
It was discovered by the speleo club of Montpellier after a dry period.
Since being adapted for tourism in 1964, it has become one of the most famous tourist sites in the  area of  Languedoc  Roussillon ( A visit of 600m, followed by  2 entrances , open to the public since 1965).

Clamouse offers a variety of aragonite and calcite crystals.
The stream going through the cave is situated on a lower level  and it gives  life to the cave.
Clamousse is extremely rich with much diversity of calcites and aragonites, many of them with colours and many different shapes (baguettes, saucer etc…)

In the tourist area you can see the “lac aux perles”, “la Salle du sable” and “le couloir blanc” ( very rich in white aragonites). In another side, not open to the public, you can see “le Nirvana Rouge” and “le bouquet de la mariee”.

The Clamouse site has been classified since the 15th of February 2005 and it’s the first European cave to be lit with leds (since 2010) for preservation reasons.
The cave has participated in scientific studies.